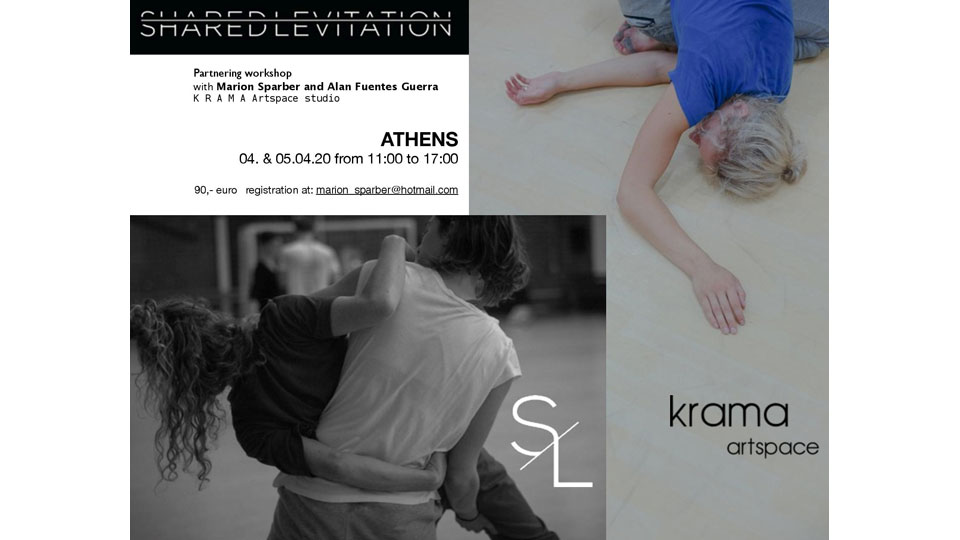 We start the class by opening our channels of awareness and connectион to our partner by manipulating, testing and speculating with his/her structure and weight. A special focus in this phase is the use of our whole body doing the task, not only being limited to our hands and arms. In this first part, the use of playfulness allows us to connect to our instinctive and primitive side, tuning into a shared natural flow of breath. Our goal is to be awake and present, as well as engage with our whole body, connect to ourselves, тхе space, the partner and to all the partners inside the space. Throughout the sessions we will build trust and awareness as well as technique and strength which give us a better understanding of dancing in a couple. With the help of exercises in different constellations, every time changing and adapting to a new partner and universe – we listen, follow and direct the movement as one functioning organism through space.

We get ready to jump, cross, push, pull, avoid, embrace and suspend each other. In the Shared Levitation class, we like to focus on an organic way of Partnering, based on action/reaction principles inspired by Contact Improvisation, fighting styles as well as social dances such as Salsa and Tango. We like to access the movement from a perspective of a deeper connection and try to avoid the superficial habit of copying shapes. Instead, we motivate every couple to find a unique way of communicating with the partner and look for individual solutions and variations of the material.

Another important aspect of our class is the constant change of the level of activity for both roles. We learn how much resistance, power and direction is needed to reach our maximum together by investigating with the given tools, and finally learning fixed Partnering material at the end of each class. Each couple will be coached by us in the technical execution of the material as well as the creative part of their personal interpretation. This workshop is thought to help experienced dancers in their process as movers as well as in the creation of Partnering-choreography. It aims to inspire to use dancing with a Partner as a tool for communication.

MARION SPARBER
Originally from South Tyrol in Italy, Marion is a professional dancer/instructor based in Berlin, Germany. She received her dance training at Varium in Barcelona and Iwanson Contemporary Dance School in Munich.

Register by sending mail to marion_sparber@hotmail.com