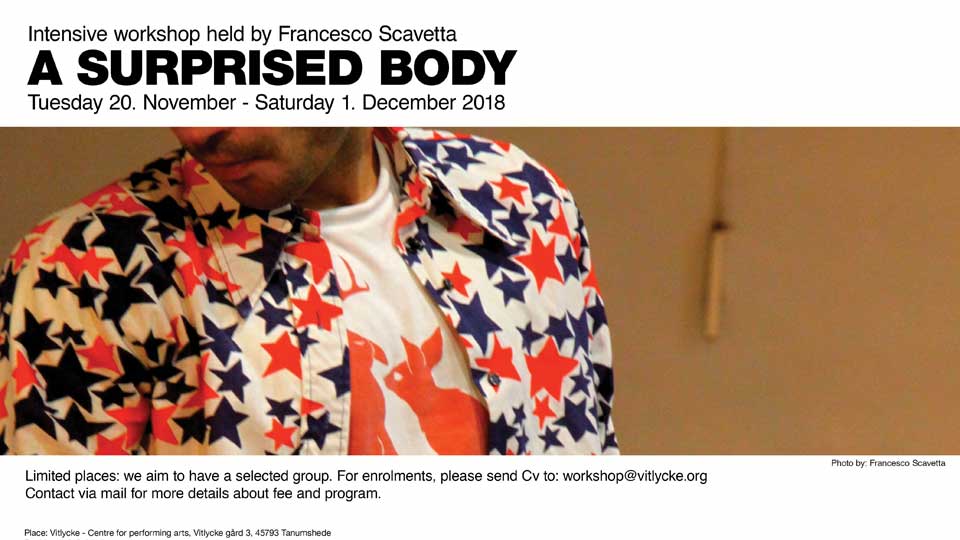 A Surprised Body Intensive Workshop by Francesco Scavetta
Scavetta proposes a personal approach to contemporary dance, based on release technique, floor work and improvisation, influenced by his experiences as a dancer and choreographer, and by his practice of tai chi chuan, that links a deep transformation of the body to a delicate poetic of movement.

The sleeping is included for limited places.
Discount for people that already attended previous workshops in Vitlycke.
Contact via mail for more details.

Francesco Scavetta proposes a personal approach to contemporary dance, based on release technique, floor work and improvisation, influenced by his experience as a dancer and choreographer, and by his practice of tai chi chuan, that links a deep transformation of the body to a delicate poetic of the movement. The teaching project “A Surprised Body” has been invited internationally in 44 countries in North, Central and South America, Europe, Africa, Middle and Far East.

Already as a title, “A Surprised Body” defines a metaphorical space. The image of a body in a state of constant alert, able to surprise itself and to escape from habits and any other kind of routine. A body more focused on reacting than on acting, on receiving, rather than doing. The goal is to let the movement to cross freely through the body, with isolation in the limbs and organic innovation.

Throughout a structured score of exercises, that combines floor work, hands-on exercises, tai chi chuan, movement sequences and improvisation the work focuses on centering and gravity; on awakening the internal and external supports while allowing isolation in the limbs and flow in the movement
The research that led to the creation of the performance Surprised Body Project will ground the workshop. The Surprised Body Project focuses on choreographic and compositional issues. In other projects created by Wee/Francesco Scavetta, the physicality has been present, conceptually, on the same level, and with equivalent valour, with text, visual art, sound installations, use of objects, props and scenographical elements. With the SBP, we focused on a research that saw the body -the movement and its relation with music and space- as its central element. Since its première in Buenos Aires in 2010, the project has been successfully presented, as an ongoing process, in 27 countries in Europe, Asia and South America.

Limited places. We aim to have a selected group.